Is this just another way for Xcel to protect its monopoly utility business model? We welcome your thoughts in the comments.

How can a solar panel sitting on someone’s roof worry the utility so much?

We see stories on the news all the time about how ordinary people from all over the U.S. are managing to lower their monthly electric bills by investing in a modest rooftop solar panel system – one that will usually end up paying for itself.

Residents who go solar aren’t just fed up with their high electric bills. They also want to do their part for the environment as well. Solar panels themselves have become cheaper and far easier to procure and install. Anyone can buy the panels and mounting hardware at places like Home Depot, or they can order them online on Amazon. The Solar Energy Industries Association (SEIA) estimates that a new solar panel system is being installed somewhere in the U.S. at least once every four minutes. It’s no surprise that the affordability and ease of solar worries utilities.

Most investor-owned electric utilities (IOUs) still operate under a regulated monopoly business model, and have done so for nearly a century. Under this model, it’s always in the IOUs’ best financial interest to generate and deliver as much power as possible.

Utilities don’t like anything that reduces the demand for the electricity that THEY sell. As more customers start choosing to receive their power from someplace else other than the utility (a.k.a. behind the meter), there is less demand for the electricity sold by the utility. Distributed solar is competition to the IOUs. Be honest, if YOU had a monopoly selling something, you probably wouldn’t want a competitor to suddenly show up, either.

Many IOUs are looking for solutions to respond to the threat of competition that distributed solar represents. Since the big IOUs sell electricity generated primarily from fossil fuels, it’s a big challenge for them to make clean renewable solar power look bad, but they’re trying very hard.

IOUs say that distributed solar and net energy metering will force them to have to charge their non-solar customers more money. Xcel states, “Solar generation does allow the utility to avoid the cost of fuel, some future generating plant needs and some system energy losses, but other costs related to distribution, transmission and generation capacity are not avoided so they ultimately are paid for by other Xcel Energy customers in Colorado.” However, this data provides supporting evidence that net metering would likely not impose costs on non-participating ratepayers. Instead, net metering would create a small net benefit. According to the study, Colorado solar customers could be providing benefits to the Xcel service area that outweigh costs by $13.6 million dollars.

I think this New York Times editorial lays all the cards on the table when it says, “The utilities hate this [net-metering] requirement, for obvious reasons. A report by the Edison Electric Institute, the lobbying arm of the power industry, says this kind of law will put “a squeeze on profitability,” and warns that if state incentives are not rolled back, “it may be too late to repair the utility business model.”…Since that’s an unsympathetic argument, the utilities have devised another: Solar expansion, they claim, will actually hurt consumers.”

Across the nation, we can clearly see a carefully coordinated effort to slow distributed solar growth as many utilities are lobbying for various regulations aimed solely at making distributed solar as financially unattractive as possible.

A change of heart?

Okay, at first glance, this looks like something for solar advocates to celebrate. The Colorado Public Utilities Commission has approved Xcel Energy’s 170-megawatt solar generation proposal. This allows Xcel to purchase the power from a utility-scale solar farm providing enough clean and renewable energy to power 31,000 homes and reduce CO2 emissions by 3.5 trillion tons.

Edward Stern, president of the Colorado Solar Industries Association even says that “utility solar is key.” But, on the one-hand, while Xcel’s investment in renewable energy is certainly an admirable step in the right direction, the utility company is also actively fighting against the ordinary person’s ability to be able to install solar on their own rooftops.

Xcel’s blog article states their primary reasons why they believe rooftop solar isn’t as good of an option. First, the Comanche Solar farm will produce 50% more energy panel-for-panel than typical rooftop solar, due in part to the tracking technology used as well as the array’s placement in an optimal area maximizing sun exposure. Second, it says that the sheer size (economies of scale) of the array will lower the costs to less than one-half the cost of rooftop solar to install (per KW). Finally, the article takes a swipe at distributed solar power by stating that the Comanche array will not have to rely on utility incentives or shifting costs from one customer group to others.

You see, it doesn’t matter whether the utility uses coal, natural gas, wind or solar panels to generate electricity. The IOU is perfectly happy as long as it continues to own the electricity being generated. Xcel seems to have figured out that if it builds and owns solar just like all of its other generation assets, then solar can become a part of the rate base – and everyone pays for their rate base. Apparently, solar isn’t unfeasible so long as the utility owns the solar. 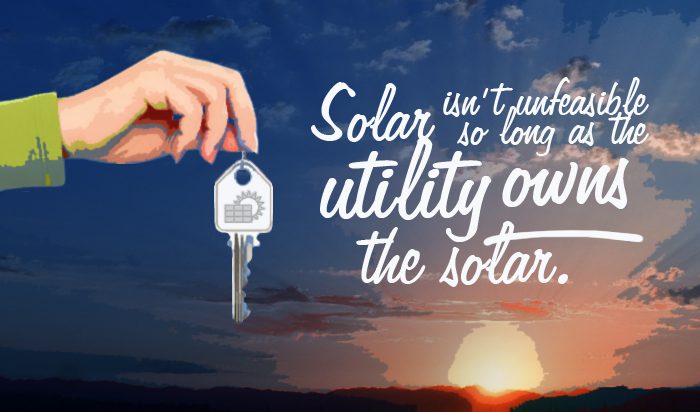 Keep in mind that Xcel’s utility-owned solar assets will be distant and very large scale, requiring Xcel to send the electricity over far distances over their transmission lines (with all the accompanying line loss) just as if they were building a distant wind farm or coal plant. Another thing to keep in mind is that Xcel is a multistate utility holding company. And when you pay your Xcel utility bill, that money leaves your local economy. Compare that to a community owned solar garden where the solar electricity is all locally generated and owned, allowing the money to stay within your local community.

Distributed solar should be the least of the IOUs worries since they represent a very small portion of the many other disruptive technologies they’re going to have to increasingly compete with over the next decade or so. Remember, anything that potentially lowers customer demand for the electricity utilities are selling is viewed by the utilities as competition under the current monopoly utility business model.

Fortunately, there are a lot of great ideas about how utilities could and should reform themselves to adapt to the future energy needs of the 21st century. We’ve seen disruptive technologies force drastic changes in previous monopolies such as the telecom, oil, and computer industries. But, electric utilities can’t evolve unless they can wean themselves off of the generation side and focus instead on the transmission and distribution side. In other words, utilities should definitely stay in charge of maintaining and operating the power grid, but the generation side should be opened to privatized competitive markets.

The following is an opinion post by David Johnson. David blogs and creates content for several companies on topics related to energy, green building, sustainability and the environment.