Freaky tales from the AUS Files…

What makes a great horror story?

So, as you read these terrifying tales be sure to ask yourself, “What would you do?” These stories are based on true events. However, names of people and or places have been changed to protect those involved. 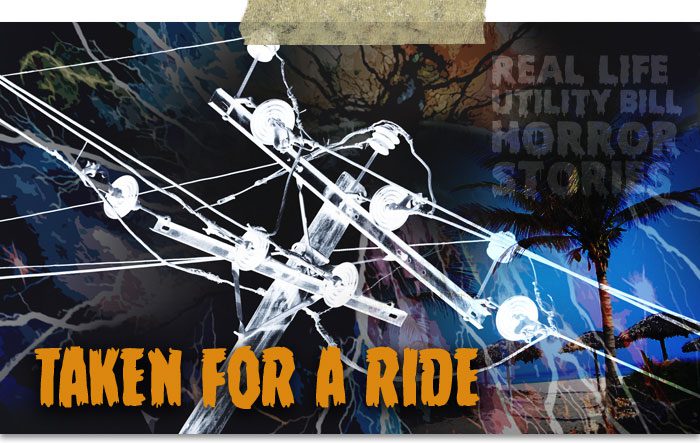 Meet Jane, a Chicago condominium resident who desperately wanted to ‘get away.’ Anyone who has ever lived in or near Chicago knows that the blustery autumn weather is only a precursor to a much more unforgiving winter. Jane knew this all too well.

As Jane gazed out her window one particularly cold and gray October afternoon, she mumbled quietly to herself, “Perhaps a vacation to someplace warm and sunny – Florida or Mexico perhaps?” She simply sighed at the thought over her coffee which sadly provided her little warmth.

Later that evening, while browsing online, Jane caught sight of an electricity supplier’s fancy website. It featured a lovely picture of a remote tropical beach overlooking an endless ocean. The image burned itself into Jane’s mind as she could practically hear the waves and smell the ocean breeze. The company website promised it would reward five thousand airline miles as a sign-on bonus if she switched her electricity service over to them. Her eyes fixed with longing at the website’s picture of the beach while her fingers began typing in her new customer account information.

A few months later, Jane’s property manager, Pete, as usual, asked all the condo residents for some of their recent bills to see if they could be saving any money. And just like always, Pete sent the bills to the energy consultation company who immediately performed a utility bill analysis for each account and sent the results back to Pete. But, one particular account stood out…

Pete tentatively picked up his phone and dialed. He cleared his throat as it rang. He was hoping there would be no answer.

“Hello?” a woman’s voice answered.
“Uh, hello, is this Jane?” Pete’s voice was shaky.
“Yes, it is,” said Jane, sounding somewhat annoyed. “May I ask who is calling?”
“This is Pete; your property manager. Sorry to disturb you, but I wanted to tell you that we’ve had your electricity bills analyzed and…” he paused to catch his breath. It was hard for him to swallow.

Jane was relieved it wasn’t another pesky telemarketer. “Oh! Hello, Pete. What’s seems to be the problem?”
Pete winced as he spoke, trying to soften the news. “Well, it looks like you’re paying…a…a bit more than you should be for your electricity.”

“Really?” Jane’s reply wasn’t filled with any real concern. She was, after all, used to paying a little more here and there for things than she expected. She replied in an almost obligatory fashion. “Do you know how much more, exactly?” Jane stared out of her window at the wet snow falling and filling the Windy City’s streets with a slushy wintry mess. But somehow, Jane’s eyes could only see a tropical beach and the endless ocean.

Pete summoned enough courage to speak frankly. “Jane, listen to me! We…we’ve just found out that you’re paying twice as much per kilowatt as you should be!”
There was a long silence.
“Jane? Are you still there?”

The image in Jane’s mind of the beautiful beach, the sound of ocean waves, of sunshine, of sweet salty air – it all shattered like broken glass. As if a dream were suddenly interrupted. Jane was thrust back into reality as her eyes remained fixed at the relentless winter falling messily outside her window. And the entire condo could hear her screams…

Poor Jane. If only she would have known to never enter into a Variable Rate agreement. She should have known better than to not have been lured in by low promotional rates, airline miles, cash rewards, or bonus points. What’s even more horrifying is that the terms and conditions of the supplier’s website even stated it couldn’t guarantee any actual electric savings. She should have read those, too.

Poor Jane just wanted a vacation. Instead, she was taken for a ride. 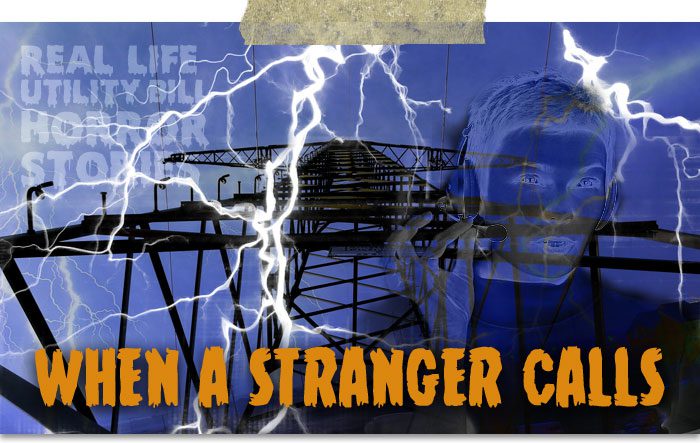 Jim woke suddenly as his phone began to ring on the end-table beside his recliner. The old widower had fallen into a deep sleep after he had taken his daily regimen of medications more than two hours ago. Jim’s hand emerged from beneath the warm afghan his late wife had knitted years ago. He groped for his glasses but discovered that he had fallen asleep with them still on his face. As he outstretched his hand to reach for the phone, he knocked over a couple of his prescription pill bottles on their sides, but their lids stayed fastened shut. He was more grateful to not have clumsily knocked over the half-full water glass, too.

Jim cleared his throat as he picked up the phone’s receiver. “Hello?” he answered drowsily.

“Good afternoon, Sir,” said a friendly and cheerful voice. “My name is Bob and I represent YourEnergy Power & Light Company. May I ask who I am speaking to?”
Jim was still half asleep. “Yes, this is Jim.”
“Thank you, Jim. Do you still live at 101 Oak Street?”
“No, I…I’ve never lived there. I live at 235 Main Street. Have for nearly 40 years now.”
”Okay, Sir. Thank you.” Jim heard what sounded like typing over the phone. “Sir, our records show that you are late in paying your last electricity bill. We are simply calling all customers to verify the accuracy of our records. Could you please state your account number?”

Jim was a little confused. He was fairly sure that he had paid his most recent bill on time. But as Jim glanced at the vast assortment of prescription medications on his end-table, he thought to himself anything’s possible.

“I’m pretty darn sure I paid that bill,” Jim replied, but there was uncertainty in his old and broken voice.
“Yes Sir, that’s probably right,” said Bob, “but our computers have been acting up and we just need to verify your account information so that we do not terminate your power by mistake. Do you happen to have your account number handy, Sir?”
Jim was still drowsy, but he understood computer problems and termination of power. “Yes…Um, can you wait for a moment?” Jim asked. “It’s in my file cabinet and it takes me a while to get around these days.”
“Yes Sir, please take your time, Sir,” said Bob’s cheery voice.

Jim slowly lifted himself from his recliner and his hands found his walker. Once he was certain of his footing, he found his way to the file cabinet in the adjacent bedroom. On his way there, he reflected at how nice it was for YourEnergy to provide such outstanding customer service. They could’ve just ignored me and switched my power off. Instead, they took the time to call. How nice! In the file cabinet, Jim found a file folder labeled YourEnergy. He quickly grabbed one of the random billing statements from the folder and made his way back to the phone. He didn’t want to make Bob wait too long on the other line, so he was nearly out of breath when he returned.

Jim slowly and clearly read his account number out loud. Bob repeated it back to Jim.

“Thank you, Sir,” replied a still cheerful-sounding Bob. Jim could hear Bob typing on his computer keyboard again. “Yes, it looks like we have found the error. Everything on your account looks up to date, Sir, and that we have indeed received your full payment. We’re sorry to have inconvenienced you today, Sir.”
“Oh, I’m just glad you took the time to call and found the problem,” said Jim. “I don’t need my power to go out!”
“Yes, Sir. That would be very inconvenient. Thank you, Sir,” said Bob, still very cheerful. “I hope you have a good day.”
“Thank YOU, Bob. You have a good day, too.”

Jim hung up the phone with a satisfied smile. He nestled back into his recliner underneath his afghan and fell back asleep relieved that his power wouldn’t be terminated.

…Jim had no idea that Bob wasn’t actually employed by YourEnergy. In fact, Bob was what’s known as a slammer – a slick-talking con-artist who switches people to his company’s electricity supply service without the customer’s authorized consent. And since Bob earns a commission for each account he signs on, he does everything he can to make sure he gets paid as much money as possible with no regard as to who gets hurt in the process.

Bob loves to target the elderly and people who aren’t very good at understanding English. In this instance, Bob used a recording device during the phone call to record Jim speaking his account number and personal information. Bob isolated the spots where Jim spoke aloud his address and the words ‘yes’ and ‘Jim.’

Bob’s company allowed for new customers to be able to sign up to switch service over the phone, and Bob knew his company’s sign-up script very well. Using the recording, he made it sound as if Jim himself had called Bob’s company and requested to switch electricity service.

Of course, the rates for Bob’s company were significantly higher than YourEnergy Power & Light’s rates; And, as the months eventually became Jim’s last remaining years, Jim had lost thousands of dollars because he, nor anyone else, never realized he had been slammed.

Old Jim should never have given out his personal information or his account number over the phone. Neither should you, especially when a stranger calls.

The following is an opinion post by David Johnson. David blogs and creates content for several companies on topics related to energy, green building, sustainability and the environment.